A rare case of a man with severe Cushing’s syndrome due to an adrenocorticotropic hormone (ACTH)-producing lung tumor, initially evident as a benign mass and further complicated by a history of metastatic rectal cancer, was described by scientists.

“Case Report: A Challenging Localization of a Pulmonary Ectopic ACTH-Secreting Tumor in a Patient With Severe Cushing’s Syndrome,” was published in the journal Frontiers in Endocrinology.

Cushing’s syndrome is characterized by excessive levels of the hormone cortisol, which can be triggered due to high levels in circulation of ACTH made by the pituitary gland.

Ectopic adrenocorticotropic syndrome is a rare type of Cushing’s, where the source of ACTH is a tumor outside of the pituitary gland. Its recommended first-line treatment is the surgical removal of the ACTH-producing tumor.

However, imaging tests can only identify the location of this tumor in about half of all cases. In up to 20% of patients, the tumor’s location may go undetected for several years.

These patients need additional imaging analyses and are often required to take second-line medications. They may also undergo a bilateral adrenalectomy — the surgical removal of adrenal glands, those responsible for the production of cortisol.

Researchers in Italy reported a case of severe Cushing’s syndrome due to an ACTH-producing tumor that remained undetected during a first set of imaging tests.

The 49-year-old man underwent a clinical evaluation in June 2020 due to suspicions of Cushing’s syndrome. He had recently developed severe back pain and progressive muscle weakness, needing crutches to walk.

He had been diagnosed with rectal cancer that had spread (metastasized) to his liver in 2015, treated with surgery, followed by chemotherapy and radiotherapy.

During a follow-up consultation in June 2017, a CT scan revealed two nodules (of 5 and 10 millimeters) in the right lung.

The nodule’s size remained stable over the next two years, and stayed negative for the radiotracer 18F-fluorodeoxyglucose (18F-FDG) — a radio-labeled sugar (glucose) molecule used in positron emission tomography (PET) scans to determine sites of abnormal glucose metabolism, commonly tumors. Since the PET scan was negative the nodules were not considered relevant.

The patient, who was overweight, was being treated for high blood pressure that began when he was 34, and had been diagnosed with diabetes three months earlier.

Physical exams found some typical features of Cushing’s syndrome, including a large, round face (moon face), and fat accumulation in the neck and shoulders (buffalo hump).

Extensive blood and imaging tests confirmed Cushing’s syndrome and the presence of an ACTH-producing tumor.

An MRI scan detected a small mass in the pituitary gland, but it was not considered relevant.

A new CT scan showed an increase in size — from five to 12 millimeters — in the nodule in the right lung’s superior lobe. The other nodule remained the same size. At this time, a new PET scan showed that the growing nodule was positive for 18F-FDG.

Further tests revealed additional signs of Cushing’s syndrome, including multiple vertebral fractures. His sugar levels worsened and he started on insulin, and his potassium fell to severely low levels. His high blood pressure was unresponsive to current treatment, and he needed additional antihypertensive therapies.

Immediately after his lab tests, the man began treatment with metyrapone (marketed as Metopirone), a cortisol-suppressing medication. The initial dose of 500 mg a day was rapidly increased to 1,000 mg a day due to low potassium levels and high blood pressure.

“This dose allowed a rapid and important reduction of basal cortisol levels and a normalization of free urinary cortisol,” the researchers wrote.

A multidisciplinary team, including an endocrinologist, a thoracic surgeon, a neurosurgeon, and a radiologist, decided that the patient should undergo surgery to remove the lung nodules. He agreed with the procedure.

Tissue analyses revealed that the middle nodule was a neuroendocrine (hormone-producing) tumor, and the nodule on the superior lobe was a metastasis of the rectal cancer.

The neuroendocrine tumor was highly positive for ACTH. After its removal, both the man’s ACTH and cortisol levels  fell.

The patient was discharged four days after the surgery in good condition. Within three months, blood tests showed his Cushing’s syndrome was still in remission.

“After three months my back still hurts, but less than before and I can easily walk with one crutch, so now I’m autonomous. My appetite is normal, I feel energetic, my mind is clear and I have begun to do small jobs,” the patient reported. “Overall, I can say that my quality of life significantly improved after the surgical intervention.”

This case involves “an unusual association of a lung carcinoid tumor responsible for a severe EAS [ectopic adrenocorticotropic syndrome] with a metastatic rectal cancer that puzzled the localization of ectopic ACTH source,” the researchers wrote.

“The biochemical diagnosis of EAS was instrumental in the reassessment of apparently benign lung nodules,” they added, noting that “a multidisciplinary approach as well as a clear and close communication with the patient played a crucial role in the management of this case.” IVIG Therapy May Be Effective, Safe for COVID-19 in Cushing’s Patients 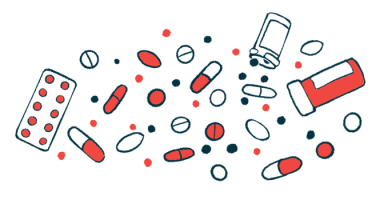