The case of a woman with Cushing’s syndrome whose symptoms included eyelid edema — swelling of the upper eyelids — was described in a recent report.

Its authors described eyelid edema is “a significant sign” of Cushing’s, but also noted the symptom “has scarcely been reported in countries other than Japan.” The team suggested that looking for this symptom may aid in the diagnostic workup for people with Cushing’s.

The report, “Eyelid edema due to Cushing’s syndrome,” was published in Clinical Case Reports.

Cushing’s syndrome is caused by the excessive production of cortisol, a hormone made in the adrenal glands just above the kidneys. Cushing’s disease is a specific form of Cushing’s syndrome where excess cortisol levels are driven by increases in a signaling molecule called ACTH, which is made in the brain’s pituitary gland, due to a tumor there.

Scientists in Japan described the case of a 49-year-old woman who went to the hospital complaining of weight gain and amenorrhea (lack of menstrual cycles), which had been going on for two years.

Her medical history included high blood pressure, osteoporosis — a condition that causes bones to become weakened and more prone to fracture — and altered levels of fatty molecules in the blood.

A physical examination revealed the woman had a number of physical characteristics that are typical of Cushing’s, including obesity with a particular accumulation of fat in the abdomen, an unusually rounded face (“moon face”), a buildup of fat behind the shoulders (“buffalo hump”), and purplish lines on the abdomen. She also had marked eyelid edema.

Cortisol levels in her blood and urine were both elevated. Treatment with the steroid dexamethasone didn’t reduce her cortisol levels, a telltale sign of Cushing’s. However, she didn’t have elevated ACTH levels, indicating a pituitary tumor was not the underlying cause of her condition, as is the case in Cushing’s disease.

Imaging tests revealed she had a tumor in her left adrenal gland, which was presumed to be the cause of Cushing’s syndrome. Surgery removed the tumor and the adrenal gland.

Three months after surgery, her eyelid edema had eased and her body weight had dropped considerably.

“Facial features including eyelid edema, as an under-recognized sign, can be diagnostic clues for an excess of corticoids [cortisol and related hormones] in a [Cushing’s syndrome] patient,” the researchers wrote. 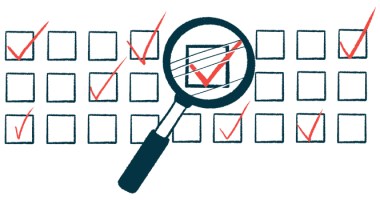